Aric Almirola is an American professional stock car racing driver who currently competes full-time in the Monster Energy NASCAR Cup Series, driving the No. 10 Ford Mustang for Stewart-Haas Racing. He recorded his first NASCAR Nationwide Series Win at the 2007 AT&T 250 in Milwaukee. Born Aric Michael Almirola on March 14, 1984 in Fort Walton Beach, Florida, USA, to Bobbi and Ralph Almirola Jr., he is the youngest of four boys. He is of Cuban descent. He began his racing career in 1992 as a 8-year-old go-karts racer. He began racing nationally in 2006 when he was fourteen years old. After graduating from Hillsborough High School in Tampa, he attended the University of Central Florida to work on a degree in mechanical engineering before leaving to pursue a career in racing. Almirola won the pole position in his debut in the World Karting Association race and finished 4th in the standings that year. He has been married to Janice Almirola since 2012. They have two children: son, Alex, and daughter, Abby. 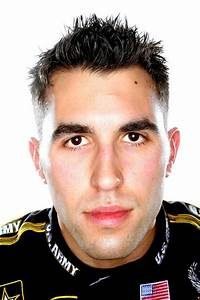 Aric Almirola Facts:
*He was born on March 14, 1984 in Fort Walton Beach, Florida, USA.
*He was raised in Tampa.
*He began his racing career in 1992.
*He is nicknamed “The Cuban Missile” due to his Cuban heritage.
*He became one of the first drivers to participate in NASCAR’s Drive for Diversity program in 2004.
*He briefly served as a test driver for Denny Hamlin while under contract with Joe Gibbs Racing.
*Visit his official website: www.aricalmirola.com
*Follow him on Twitter and Facebook.