Akina Nakamori is a Japanese pop singer and actress. One of the most popular singers of the 1980s in Japan, Nakamori rose to fame after winning the 1981 season of the talent show Star Tanjō!. Her debut single, “Slow Motion”, achieved remarkable success, reaching number 30 in the Oricon charts. Her second single, “Shoujo A”, which peaked at number five on the Oricon chart and has sold over 390,000 copies. Her 3rd single “Second Love” proved to be her best-selling single. Her 2nd album Variation became her first number 1 on the Oricon Weekly Albums Chart, staying three weeks a top. As an actress, she made her debut in the 1985 Japanese romance movie Ai, Tabidachi. Born on July 13, 1965 in Kiyose City, Tokyo, Japan to Chieko and Akio Nakamori, she has two older sisters (Akie, Akiko), two older brothers (Akihiro, Akinori) and one younger sister (Akiho). She made her debut in 1982 with the single “Slow Motion,” which was released on 1 May 1982 and sold 174,000 copies, reaching number 30 in the Oricon charts. 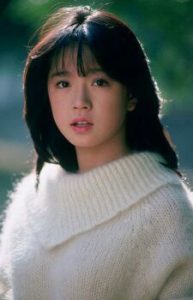 Akina Nakamori Facts:
*She was born on July 13, 1965 in Kiyose City, Tokyo, Japan.
*She took ballet lessons from the age of 4 through 13.
*She entered the music industry through a singing talent show Star Tanjō!.
*She made her debut in 1982 with the single “Slow Motion.”
*Her second single, “Shōjo A” was nearly banned for its risque lyrics.
*Her hobbies include: Acting, Ballet , Cooking, Photography, Fashion, Knitting, Music, Pencil-sketching, Pottery, Reading, and Travel.
*Her favorite flower is Casablanca.
*She doesn’t like using mobile telephones and thus doesn’t own one.
*Visit her official website: www.nakamoriakina.com
*Follow her on Facebook.