Ariel Tatum is an Indonesian actress, born November 8, 1996, in Jakarta, Indonesia, to Rico Murry and Matilda Tatum. She started her career as an advertising model. She starred in soap operas like Nikita, Cinta RockStar, The same love, and Cinta Yang Sama. She made her screen debut with a role as Ariel in the 2005 film Ariel & Raja Langit. She then starred in Oh Baby and Kawin Laris. 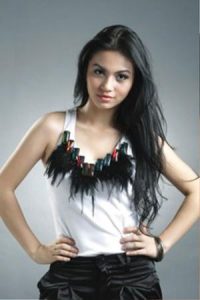 Ariel Tatum Facts:
*She began her modeling career at the age of 10.
*She recorded a duet with friend and fellow star Ari Lasso called “Karena Aku Telah Denganmu” in 2012.
*Her grandmother was a popular Indonesian actress.
*Follow her on Twitter, Facebook and Instagram.