Jordan Ladd is an American scream queen actress, born January 14, 1975, in Hollywood, California, to Charlie’s Angels star Cheryl Ladd and David Ladd, a producer and former actor. She belongs to Ashkenazi Jewish, distant Irish, German, and English descent. She has appeared in several horror films. She began her acting career at age 15 with a minor role in the 1990 TV movie The Girl Who Came Between Them. She became recognized for her roles in 2002’s Cabin Fever and 2007’s Hostel: Part II. Her other film roles include 2004’s Club Dread, 2007’s Death Proof, and 2009’s Grace. She was married to Conor O’Neill from 2001 and 2005. 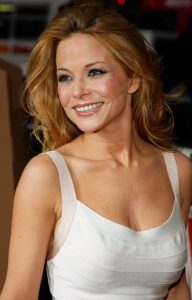 Jordan Ladd Facts:
*She began appearing in commercials at the age of 2.
*Her first television appearance was opposite James Garner in a commercial for Polaroid.
*She had a breast reduction at age 16 in 1991
*She was ranked #5 on Maxim’s “Hottest Women of Horror Movies” list.