Arjun Kapoor is an Indian actor. He is best known for his roles in the films Ishaqzaade, Aurangzeb, Gunday, and 2 States. He played Savio Da Gama in the English-language road comedy Finding Fanny. Born on June 26, 1985 in Bombay, Maharashtra, India, he is the son of film producers Boney Kapoor and Mona Shourie Kapoor, and nephew of Anil Kapoor and Sanjay Kapoor who are both actors. He completed his schooling from Arya Vidya Mandir, Juhu, Mumbai, and attended Narsee Monjee college in Mumbai. He learned theaters from the Asian Academy of Film and Television, Noida, India. Arjun worked an asociate producer on his father’s productions No Entry and Wanted, before making his acting debut with the 2012 action romance Ishaqzaade. He has been in a relationship with Malaika Arora since 2017. He previously dated Arpita Khan, the adopted sister of Salman Khan, long before his Bollywood debut. 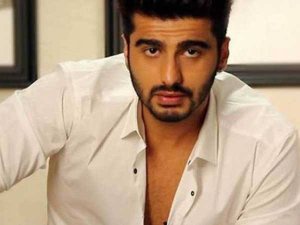 Arjun Kapoor Facts:
*He was born on June 26, 1985 in Bombay, Maharashtra, India.
*His parents separated when he was 11 years old.
*He wanted to become a director.
*He made his acting debut with the 2012 action romance Ishaqzaade.
*He has a celebrity crush on Kareena Kapoor.
*He is a major WWE wrestling fan.
*He has two dogs named Chocolate and Fubu.
*Follow him on Twitter, YouTube, Facebook and Instagram.