Arnab Goswami is an Indian journalist and news anchor, best known as the editor and majority owner of the news channel Republic TV. He is also president of News Broadcasting Association’s governing board. Prior to joining Republic TV, Goswami was the editor-in-chief and a news anchor of Times Now and ET Now, from 2006 to 2016. Previously, Goswami had also served stints at NDTV and The Telegraph. In 2002, he published a book, Combating Terrorism: The Legal Challenge. Born Arnab Ranjan Goswami on October 9, 1973 in Guwahati, India, to an Assamese family, his father, Manoranjan Goswami, served in the Army before joining the Bharatiya Janata Party, and his mother is Suprabha Gain-Goswami, a writer. He earned his degree in sociology from Hindu College in Delhi University and his Master’s in Social Anthropology from Oxford University. He started his career as a journalist with ‘The Telegraph’ newspaper in Kolkata; less than a year later, Goswami moved to Delhi and joined NDTV. He is married to Samyabrata Ray Goswami with whom he has a son. 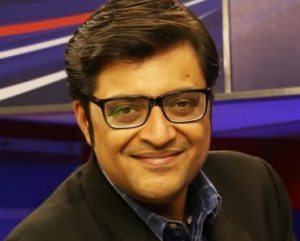 Arnab Goswami Facts:
*He was born on October 9, 1973 in Guwahati, India.
*His father served in the Army before joining the Bharatiya Janata Party.
*His paternal grandfather, Rajani Kanta Goswami, was a lawyer, and his maternal grandfather, Gaurisankar Bhattacharyya, was an elected legislator from the Communist Party of India and served as the leader of the opposition in Assam for many years.
*He became Editor-in-Chief of the news channel Times Now in 2006.
*He won the Ramnath Goenka Award for Excellence in Journalism (TV) in 2008.
*He has been accused of opinionated reporting in support of Bharatiya Janata Party and Hindutva across a wide spectrum of situations including by uncritical reproduction of government narratives, avoiding criticism of figures from the ruling party (BJP) and presenting political opponents in a negative light.
*Follow him on Twitter.