Ashlee Simpson is an American singer, songwriter, and actress. She is the younger sister of singer and actress Jessica Simpson. Ashlee released her debut studio album, Autobiography, in 2004, which achieved remarkable success, reaching #1 in Billboard 200 and was certified as 3× Platinum in USA, 2× Platinum in Canada and Gold in Britain. She also starred in her own MTV program, The Ashlee Simpson Show. As an actress, she played a recurring role of Cecilia Smith in the family drama 7th Heaven. In 2009, she was cast in The CW series Melrose Place as Violet Foster. She has also starred in the movies The Hot Chick (2002), Undiscovered (2005) and Pawn Shop Chronicles (2013). Born Ashley Nicolle Simpson on October 3, 1984 in Waco, Texas, she is the daughter of Tina and Joe Simpson and younger sister of singer and actress Jessica Simpson. Ashlee started dancing at the age of four and started studying ballet in New York at the age of eleven. She began appearing on commercials when she was fifteen. She married Peter Wentz in 2008, and the couple had a son named Bronx in 2008 before getting divorced in 2011. She later married actor Evan Ross in 2014, and the couple welcomed a daughter named Jagger in July 2015. 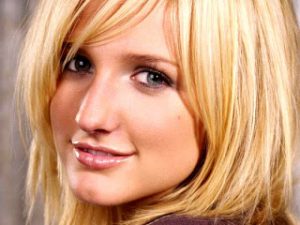 Ashlee Simpson Facts:
*She was born in Waco, Texas on October 3, 1984.
*Her ancestry includes English, with some Scottish, distant German and Swiss-German.
*Her parents divorced in 2013.
*Starting at age 4, Ashlee began dancing.
*As a teenager, she suffered from anorexia.
*She is a big fan of the cosmetics brand La Mer.
*She was named 18th on the Maxim magazine Hot 100 of 2008 list.
*She is friends with singer Fefe Dobson, Emmy Rossum, Simon Cutmore and Jennifer Morrison.
*Follow her on Twitter, YouTube, Facebook and Instagram.