American recording artist and actress whose debut album, Sweet Kisses (1999), peaked at number 25 on the US Billboard 200 albums chart, and was certified double-platinum by the Recording Industry Association of America (RIAA). Her debut single, “I Wanna Love You Forever” (1999), reached number 3 on the Billboard Hot 100 and was certified platinum by the RIAA. Simpson’s third studio album, In This Skin (2003), became the best-selling effort of her career, achieving a peak position of number 2 and triple platinum certification in the US. By 2009, In This Skin had sold 3 million copies in the US and produced four singles. As an actress, she has appeared in the films The Dukes of Hazzard, Blonde Ambition, and Employee of the Month. Born Jessica Ann Johnson on July 10, 1980 in Abilene, Texas, she is the daughter of Tina and Joe Simpson and older sister of singer and actress Ashlee Simpson. Simpson was married to musician Nick Lachey from 2002 to 2006. In July 2014, Simpson married retired NFL tight end Eric Johnson after four years of dating. They have three children, Maxwell, Ace and Birdie. 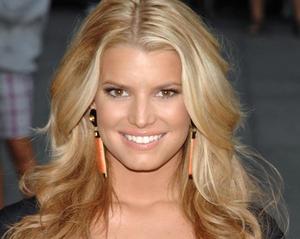 Jessica Simpson Facts:
*She was born on July 10, 1980 in Abilene, Texas, USA.
*Her parents are Joe Simpson and Tina Simpson.
*Her ancestry includes English, some Scottish, and distant German and Swiss-German.
*She performed in church choirs as a child.
*She signed with Columbia Records at age 16, in 1997.
*People Magazine named her one of the top 50 Most Beautiful People in the World in 2005.
*She is close friends with musical group Destiny’s Child.
*She is friends with Dane Cook, Brooke Shields, Jamie-Lynn Sigler, Elle Macpherson, Jennifer Garner, Ashton Kutcher, and John Mayer.
*Visit her official website: www.jessicasimpson.com
*Follow her on Twitter, YouTube, Facebook and Instagram.