Ashley Argota is an American actress and singer. She is best known for television roles as Lulu on True Jackson, VP, Kelly on Bucket & Skinner’s Epic Adventures, S-1/Taylor on Lab Rats, Lou Chan on The Fosters and Abigail Abaya on Liberty Crossing. She also portrayed Nevaeh Barnes in the Disney TV movie How to Build a Better Boy. She has also played prominent roles in the films Broken: A Musical, All Hallows’ Eve, Cover Versions, Snatchers and I Hate New Year’s. As a singer, Argota has released two independent albums Dreams Come True and Ashley. 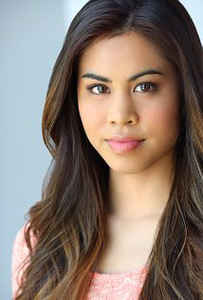 Ashley Argota Facts:
*She was born on January 9, 1993 in West Redlands, California, USA.
*She started acting at the age of 5.
*She began her professional career in 2003 as contestant on the Arsenio Hall-hosted Star Search on CBS.
*She played Lulu on the Nickelodeon sitcom True Jackson, VP from 2008 to 2011 and Kelly on the Nickelodeon sitcom Bucket & Skinner’s Epic Adventures from 2011 to 2013.
*She was a celebrity contestant on the game show BrainSurge.
*Her favorite TV shows include Scandal, Greys Anatomy, Revenge, NCIS, Homeland, Whose Line Is It Anyway?, & Friends.
*Her hobbies include reading, listening to music, knitting/crocheting, playing with her dog, texting her friends, and watching TV.
*She likes butterflies, and has a butterfly necklace that she always wears.
*Visit her official website: www.ashleyargota.com
*Follow her on Instagram.