Ashley Graham is an American plus-size model from Lincoln, Nebraska. She is best known as a lingerie model for the plus-size clothing store Lane Bryant. She has been featured on the cover of fashion magazines such as Vogue, Glamour, Harper’s Bazaar, and Elle. In addition, she has done several Levi’s campaigns and had appeared on MTV’s Made as a coach. She belongs to German and English descent. She has two younger sisters. She has been married to videographer Justin Ervin since 2010. 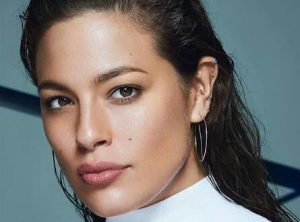 Ashley Graham Facts:
*She began her modeling career after getting discovered by I & I agency in Oak View Mall at the age of 12 (in 2000).
*She was Full Figured Fashion Week’s Model of the Year 2012.
*She designed a lingerie line for Addition Elle in 2013.
*She is a morning person.
*She goes with the life motto – “Sexy is a state of mind.”
*She has been included in the list of Top Sexiest Women in models.com list.
*She is the first plus-sized model to be hired by Jennifer Lopez for her clothing line.
*Follow her on Twitter, Facebook and Instagram.