Ashley Roberts is an American singer, dancer, actress, model, and TV personality. She is best known as a member of the American pop girl group and dance ensemble The Pussycat Dolls. The Pussycat Dolls achieved worldwide success with #1 singles “Don’t Cha”, “Buttons”, “Stickwitu”, and their multi-platinum debut album PCD (2005). Roberts’s debut solo studio album, Butterfly Effect, was released in 2014. She has also appeared in various British television shows such as I’m a Celebrity…Get Me Out of Here!, Dancing on Ice, Ant & Dec’s Saturday Night Takeaway, The Jump, and Strictly Come Dancing. Born Ashley Allyn Roberts on September 14, 1981 in Phoenix, Arizona, to parents Peggy and Pat Roberts, she is of English, Welsh, Irish, Swedish and Spanish descent. She has a brother named Jayce. She was educated at Shadow Mountain High School. She was in a relationship with fellow Strictly Come Dancing pro Giovanni Pernice from 2018 to 2020. 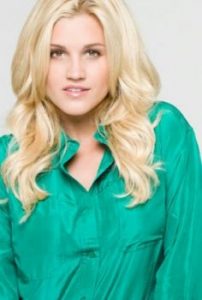 Ashley Roberts Facts:
*She was born on September 14, 1981 in Phoenix, Arizona, USA.
*She began dancing at the age of three and singing at eight.
*She studied modern dance in California during her high school summer vacations.
*She joined the Pussycat Dolls in 2003 and left the group in 2010.
*She competed in the twelfth series of the British reality show I’m a Celebrity…Get Me Out of Here!.
*She served as a judge on the show Dancing on Ice.
*She was a contestant on the sixteenth series of Strictly Come Dancing.
*Follow her on Twitter, YouTube, Facebook and Instagram.