Canadian supermodel who came to prominence in the 1990s. Evangelista is widely regarded as one of the most accomplished and influential models of all time, and has been featured on over 700 magazine covers. She was famous for being the longtime “muse” of photographer Steven Meisel, as well as for the phrase “We don’t wake up for less than $10,000 a day.” Evangelista holds the record for her multiple appearances on the cover of Vogue Italia, all of which were photographed by Steven Meisel. She has also worked with top fathion photographers such as Peter Lindbergh and Patrick Demarchelier. Born on May 10, 1965 in St. Catharines, Ontario, Canada, to Italian immigrants parents Marisa and Tomaso Evangelista, she has two brothers. Evangelista was educated at Denis Morris Catholic High School in Ontario. She was married to Gerald Marie from 1987 until 1993. She has a son: Augustin James Evangelista with ex-boyfriend, François-Henri Pinault. She had a six-year relationship with Twin Peaks star Kyle Maclachlan. 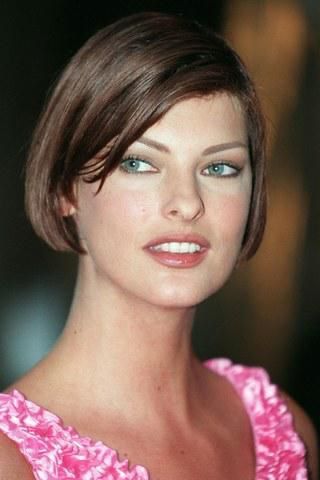 Linda Evangelista Facts:
*Born on May 10, 1965 in St. Catharines, Ontario, Canada, she is of Italian decent.
*She started modelling locally in her hometown and took part in the Miss Teen Niagara beauty pageant in 1981.
*She was discovered by a representative of Elite Model Management at the Miss Teen Niagara pageant.
*Her first major fashion magazine cover was for the November 1984 issue of L’Officiel.
*One of the five supermodels. The others are Cindy Crawford, Christy Turlington, Claudia Schiffer, and Naomi Campbell.
*People Magazine named her one of the top 50 Most Beautiful People in the World in 1990.
*She was ranked #8 in Channel 5’s “World’s greatest supermodel”.
*She holds the record for the most appearances on the cover of Vogue Italia.
*She enjoys cooking, hiking, yoga, skiing, and pilates.
*She received one of the largest divorce settlements in history, and received a staggering $46,000 a month from her ex-boyfriend, billionaire François-Henri Pinault.
*Follow her on Instagram.