Ashton Kutcher is an American actor and former model who became recognized by portraying the role of Michael Kelso in That ’70s Show (1998). He has also starred in the films ‘Guess Who,’ ‘The Butterfly Effect,’ ‘A Lot Like Love,’ ‘Dude, Where’s My Car?,’ ‘Spread’, ‘The Guardian,’ ‘No Strings Attached’ and ‘Jobs.’ Kutcher was born Christopher Ashton Kutcher in Iowa to Diane and Larry M Kutcher. He was raised in a conservative Roman Catholic family. He has a fraternal twin brother named Michael, and a sister named Tausha. He is of Czech descent on his father’s side, and of Irish, German, and Czech descent on his mother’s side. He has been married to actress Mila Kunis since July 2015. They have two children. He was previously married to actress Demi Moore. 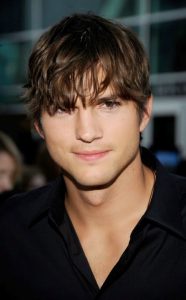 Relationships / Affairs / Girlfriend:
In late 2002, Ashton Kutcher began dating Brittany Murphy, while the two were doing ‘Just Married’ together.
He dated January Jones from 1998 to 2001.
He has been in a relationship with Mila Kunis since April 2012 and they became engaged in February 2014, and married in July 2015. they have a daughter, Wyatt and a son Dimitri Portwood.

Ashton Kutcher Facts:
*He belongs to Irish, German, and Czech descent.
*He began his career as a model.
*He owns a restaurant in Los Angeles, California called Dolce.
*He has two toes on his left foot that are fused together, meaning they are webbed.
*His twin brother Michael was born with a septal heart defect.
*He was voted #3 on VH1’s 100 Hottest Hotties.
*Time Magazine named him one of Top 100 Most Influential People in 2010.
*While studying at the University of Iowa, he sold his blood in order to pay his college fees.
*He is a big fan of the Chicago Bears, and can be seen wearing various items of Bears clothing in his films.
*He is a liberal Democrat and has supported the presidencies of Bill Clinton and Barack Obama.
*Follow him on Twitter, Facebook, YouTube, and Instagram.