Ayeza Khan is a Pakistani television actress and model born in Karachi. She first gained attention in 2011, with her role Ajia in the Geo TV romantic drama Tootey Huwey Per. She later became an established Pakistani actress, appearing in the television series Tum Kon Piya (as Elma), Mere Meherbaan (as Haya), Adhoori Aurat (as Maryam), Kahi Unkahi (as Zoya), and Aks (as Zoonaira “Zooni” Javed). She won the Lux Style Award for Best Actress for her role as Farah Ibrahim in the 2014 social drama Pyarey Afzal. Born Kinza Khan on January 15, 1991, in Karachi, Sindh, Pakistan, she is the daughter of Riza Yilmaz, and sister to Wasif Khan, Arham Khan and Hiba Khan. Since 2014, she has been married to actor Danish Taimoor. Together they have one daughter, Horrain Taimoor, born in 2015. 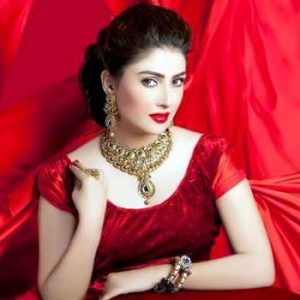 Ayeza Khan Facts:
*Her real name is Kinza Khan.
*She started modeling at the age of 16.
*In 2006, she began dating actor Danish Taimoor, they got married in 2014.
*Follow her on Twitter, Facebook and Instagram.