Ayu Rosmalina, widely known by her stage name Ayu Ting Ting is an Indonesian dangdut singer who rose to fame in 2011 for her hit single “Alamat Palsu”. Her other single hits are “Suara Hati,” “Sambaldo,” and “Geboy Mujair.” Born as Ayu Rosmalina in Depok, West Java, Indonesia, Ting Ting is the daughter of a civil servant and his wife. She married Henry Baskoro Hendarso in 2013, and the couple had a daughter named Bilqis in 2013 before getting divorced in 2014. 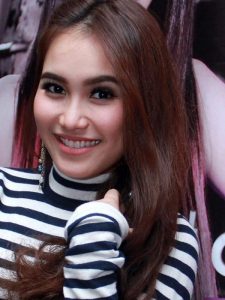 Relationships / Affairs / Boyfriend:
She was in a relationship with indian actor Shaheer Sheikh for four months.

Ayu Ting Ting Facts:
*She began modeling at the age of five.
*Her stage name, Ting Ting, is related to virginity.
*She started her music career as a wedding singer when she was fourteen.
*Her hit song “Alamat Palsu” has been covered by Olga Syahputra.
*She is a former Miss Depok.
*Follow her on Twitter, Facebook and Instagram.