Diane Kruger is a German-American actress and former fashion model, born July 15, 1976, Algermissen, Lower Saxony, Germany, to Maria-Theresa, a bank employee, and Hans-Heinrich Heidkrüger, a computer specialist. She is best known for her appearances as Helen in the epic war film Troy, Dr. Abigail Chase in the adventure/heist film National Treasure and its sequel, Bridget von Hammersmark in Inglourious Basterds, Anna in the sci-fi drama Mr. Nobody, Gina in the psychological thriller film Unknown, Marie Antoinette in the French-language film Farewell, My Queen and Jessie in the drama-thriller Disorder. She won a Screen Actors Guild Award for Best Supporting Actress for her performance in Inglourious Basterds. She has a younger brother named Stefan. She was married to Guillaume Canet from 2001 to 2006. 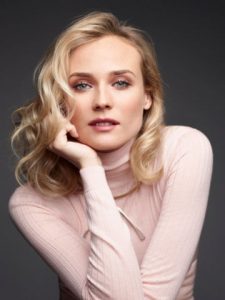 Relationships / Affairs / Boyfriend:
She was married to Guillaume Canet from 2001 to 2006.
She was in a long-term relationship with Joshua Jackson from April 2006 to July 2016.

Diane Kruger Education:
She attended a Catholic school in a small German town.

Diane Kruger Facts:
*She became an American citizen in 2013.
*She was raised as Roman Catholic.
*She began her dancing career in the Royal Ballet in London.
*Filmmaker Luc Besson convinced her to move from modeling to acting.
*She took acting lessons from Cours Florent.
*She speaks German, English, and French fluently.
*She is an active supporter of UNICEF.
*People Magazine named her one of the top 50 Most Beautiful People in the World in 2004.
*Lives in Paris. She had her own house built there in 2015.
*Follow her on Facebook and Instagram.