Baba Ali is an Iranian-born American stand-up comedian who educates audiences about how Muslim is misinterpreted. He is the co-founder of Ummah Films, a Muslim film company which attempts to provide Halal (Islamically permissible) entertainment to Muslims and non-Muslims alike. The company has produced several web series, including The Reminder Series and Ask Baba Ali. He also starred in the 2015 film American Sharia alongside Omar Regan. Born Ali Ardekani on October 29, 1975 in Tehran, Iran, to a Persian family, he grew up in a secular irreligious household in Los Angeles, California. He worked in a California IT field after converting to Islam at age 20. He is married and has two children. 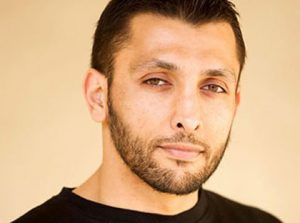 Baba Ali Facts:
*He was born in Tehran, Iran on October 29, 1975 as Ali Ardekani.
*He converted to Islam after attending an Islamic Camp at the age of 20.
*He tries to clarify the true meaning of Islam to those who see it as a source of terrorism.
*His videos have been watched more than ten million times.
*He founded Muslim matrimonial website, Half Our Deen in 2011.
*Visit his official website: www.alistandup.com
*Follow him on Twitter and YouTube.