Celina Sinden is an English actress. She is best known for playing the role of Greer Norwood in the American series Reign. She began her tenure on the show on the show’s pilot In February 2013. Born on July 31, 1987 in London, England, she attended and graduated from the Guildhall Drama School with a degree in performance. She has been married to Rossif Sutherland since February 21, 2016. Together they have one son, Theodore Sutherland. 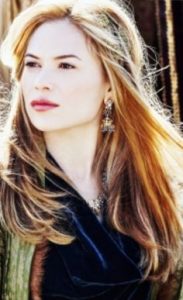 Celina Sinden Facts:
*She was born and raised in London, England.
*She appeared in the October 2013 issue of Glamour magazine.
*She is a Pescetarian.
*She made her 50th appearance on Reign during the episode “Fight or Flight” on November 20, 2015.
*She has one son, Theodore with her husband Rossif Sutherland.
*Follow her on Instagram.