Bar Refaeli is an Israeli supermodel and television host, best known for her appearances in the Sports Illustrated Swimsuit Issue, including her appearance on the cover in 2009. She appeared in Sports Illustrated Swimsuit Issue in the years 2007, 2008, 2009, 2010 and 2012. In 2012, Refaeli was voted No. 1 in Maxim Magazine’s “Hot 100” list. She has also appeared on the covers of major international magazines including Elle, Marie Claire, GQ, Maxim, and Esquire. As a host, Refaeli has hosted The X Factor Israel since 2013 and co-hosted the Eurovision Song Contest 2019 in Tel Aviv. Born on June 4, 1985 in Hod Hasharon, Israel, to parents Tzipi and Rafi Refaeli, her siblings are On, Dor, and Neil Ben-Porat. Refaeli moved to the United States to pursue a modeling career rather than fulfill her country’s requirement for its residents to serve in the armed forces. On September 24, 2015, she married Israeli businessman Adi Ezra in Israel. They have three children. She was previously married to Arik Weinstein from 2003 to 2005. 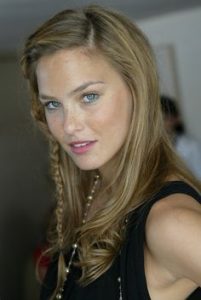 Bar Refaeli Facts:
*She was born on June 4, 1985 in Hod Hasharon, Israel, to a secular Jewish family.
*She began modeling at the age of eight months.
*She is the first Israeli model to be featured in Sports Illustrated magazine.
*She was ranked #45 on the Maxim magazine Hot 100 of 2007 list.
*She was voted #6 on the 2011 Maxim list “Hot 100” women.
*She was voted #51 on Ask men’s Top 99 ‘most desirable’ women of 2012 list.
*She was placed at number one on the Maxim Hot 100 in 2012 as the “most beautiful woman in the world”.
*She was the highest-paid model in Israel according to Forbes Israel in 2013.
*She had been in a relationship with Leonardo DiCaprio twice.
*She has a pet dog, Bella.
*She does smoking.
*Follow her on Twitter, Facebook and Instagram.