Dee Wallace is an American actress, best known for her role as Mary, the mother, in Steven Spielberg’s film E.T. the Extra-Terrestrial (1982). She is also notable for her starring roles in several horror films including The Hills Have Eyes, The Howling, Cujo and Critters, which earned her the title of “scream queen”. She is also known for television roles as Lori Randall on Together We Stand, Dee McCullough on The New Lassie, Colleen Halbert on Sons & Daughters, and Grandma Becky Quinn on Just Add Magic. She has also made guest appearances in a number of television shows. Born Deanna Lee Bowers on December 14, 1948 in Kansas City, Kansas, to parents Maxine and Robert Stanley Bowers, she did her schooling from Wyandotte High School in Kansas City, Kansas, and obtained an education degree the University of Kansas. She studied drama at HB Studio in Greenwich Village, New York City. 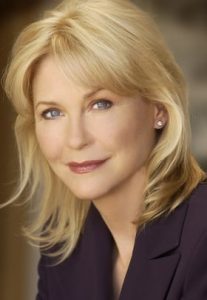 Dee Wallace Facts:
*She was born on December 14, 1948 in Kansas City, Kansas, USA.
*Her father, Robert Stanley Bowers, was an alcoholic who later committed suicide.
*She graduated from Wyandotte High School in Kansas City, Kansas.
*She received her education degree from the University of Kansas.
*Visit her official website: www.iamdeewallace.com
*Follow her on Twitter, Facebook and Instagram.