Barbara Meier is a German fashion model and actress who won the second cycle of Germany’s Next Topmodel. She has appeared on the cover or been featured in many international fashion magazines including Vogue (Taiwan), Madame Figaro (Russia), L’Officiel (France), Cosmopolitan, Icon, Style International and Tango and worked for many brands such as Pantene, C&A, and Disneyland Resort Paris. As an actress, she has appeared in Der Alte, Notruf Hafenkante, Stuttgart Homicide, SOKO Wismar, and Mord in bester Gesellschaft. Born on July 25, 1986 in Amberg, Germany, she studied mathematics at the University of Applied Sciences in Regensburg before being discovered by a modeling scout. In 2019, she married Klemens Hallmann. 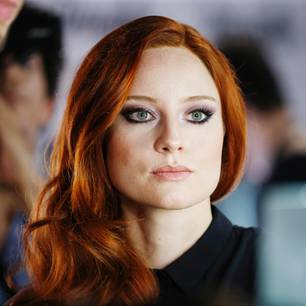 Barbara Meier Facts:
*She was born on July 25, 1986 in Amberg, Germany.
*While shopping at a mall, she was approached by a model scout who invited her to the casting of the show Germany’s next Topmodel.
*She is the winner of the second season of Germany’s Next Topmodel (GNTM), by Heidi Klum.
*Visit her official website: www.barbarameier.com
*Follow her on Twitter, Facebook and Instagram.