Michelle Monaghan is an American actress. She is best known for her roles in the films Kiss Kiss Bang Bang, Gone Baby Gone, Made of Honor, Eagle Eye, Trucker, Source Code, Pixels, Patriots Day, Mission: Impossible III and Mission: Impossible – Ghost Protocol. She is also known for television roles such as Maggie Hart in True Detective, Sarah Lane in The Path, and Eva Geller in Messiah. Born Michelle Lynn Monaghan on March 23, 1976 in Winthrop, Iowa, to parents Sharon and Robert John Monaghan, she has two older brothers named John and Bob. She graduated from East Buchanan High School in 1994, and studied journalism at Chicago’s Columbia College. She appeared on the covers of several magazines before she started her acting career. On August 12, 2005, she married Australian graphic designer Peter White. They have two children. 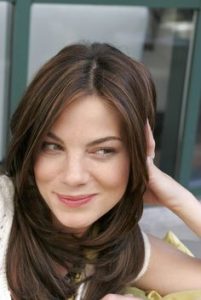 Michelle Monaghan Facts:
*Born on March 23, 1976 in Winthrop, Iowa, Monaghan was raised Catholic.
*Her father is of Irish descent while her mother is of mostly German, with small amounts of Swiss-German and English, ancestry.
*She won blue ribbons as a hog wrestler when she was age 13.
*She moved to New York in 1999.
*She started modeling when she was still studying journalism.
*She made her TV debut in two episodes of Young Americans. (2000)
*She is left-handed.
*Follow her on Twitter, Facebook and Instagram.