Barbora Strýcová is a former Czech professional tennis player who achieved a career-high singles ranking of World No. 16 on 16 January 2017, and a doubles ranking of world No. 1 on 15 July 2019.

Turning professional in 2002, Strýcová’s best singles and doubles Grand Slam performances both came at the 2019 Wimbledon Championships, where she reached the singles semifinals and won the women’s doubles title with Hsieh Su-wei as her partner. Strýcová has won 31 doubles titles and two singles titles on the WTA Tour, as well as the bronze medal in women’s doubles at the 2016 Olympics alongside Lucie Šafářová, having defeated defending gold medalists Serena and Venus Williams in the first round. She was also a member of the Czech Fed Cup team that captured the title in 2011, 2012, 2014, 2015, 2016, and 2018. She announced her retirement from professional tennis on 4 May 2021. 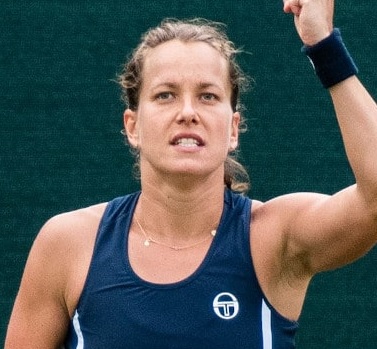 Barbora Strýcová Facts:
*She was born on March 28, 1986 in Pilsen, Czechia.
*She started playing tennis at the age of 4.
*She was named ITF Junior World Champion in 2002.
*She made her professional debut in 2002.
*She represented the Czech Republic during the 2004 Olympics.
*She won the 2015 Fed Cup.
*She has a career-high doubles ranking of No. 1.
*She was married to retired tennis player, Jakub Záhlava, a cousin of Sandra Záhlavová, from 2006 to 2015.
*She retired from professional tennis on 4 May 2021.
*She announced her pregnancy on social media on 26 March 2021.
*Follow her on Twitter and Instagram.