Barsha Raut is a Nepali actress and model. She is best known for her role as Anjana in the 2016 film ‘Nai Nabhannu La 4’. She played Brinda in the 2016 blockbuster film Chhakka Panja. Barsha’s other notable film appearances include Jatra (2016), Chhakka Panja 2 (2017), and Mr. Jholay (2018). Born on December 14, 1993, in Sindhuli, Nepal, her father is a businessman and her mother is a housewife. She was educated at Asian Public School, Himalayan Whitehouse and Apex college. She began her acting career in 2013, appearing in the music video ‘Rojeko Maile’. In 2019, Raut married her boyfriend of five years actor Sanjog Koirala. 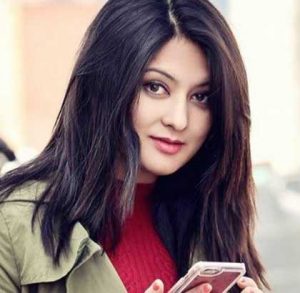 Barsha Raut Facts:
*She was born on December 14, 1993, in Sindhuli, Nepal.
*She studied BBA in Apex college, where she competed in Mr and Ms college.
*She has a pet dog, Dalley.
*Currently, she resides in Kathmandu, Nepal.
*Follow her on Facebook and Instagram.