Belinda Bencic is a Swiss professional tennis player who achieved a career-high singles ranking of World No. 4 on February 17, 2020. Turning professional in 2012, Bencic has won four singles and two doubles titles on the WTA Tour. Born on March 10, 1997 in Flawil, Switzerland, to Dana and Ivan Bencic, both of her parents were born in Czechoslovakia, but her father’s family emigrated to Switzerland in 1968 to flee the Warsaw Pact invasion by the Soviet Union. She has a brother named Brian. Bencic began playing tennis at age four and made her professional debut in 2012. Bencic’s first big breakthrough came at the 2014 US Open, where she became the youngest quarterfinalist since Hingis in 1997. Bencic won her first two WTA titles in 2015, including the Canadian Open where she defeated four of the top six players in the world. 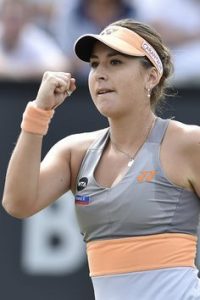 Belinda Bencic Facts:
*She was born on March 10, 1997 in Flawil, Switzerland.
*She started playing tennis at age four.
*She made her debut for the Switzerland Fed Cup team in 2012.
*She became world’s no. 1 junior tennis player in singles in 2013.
*The youngest female tennis player to be ranked in top 10 in the WTA list in 2016. (She was only 18)
*Visit her official website: www.belinda-bencic.com
*Follow her on Twitter, Facebook and Instagram.