Queen Latifah is an American, rapper singer, actress and model who won a Grammy Award in 1994 for Best Solo Rap Performance for “U.N.I.T.Y.”. From 1993 to 1998, Latifah starred as Khadijah James on the FOX sitcom Living Single, and was nominated for an Academy Award for Best Supporting Actress for her role in the 2002 film Chicago. In 2015, Latifah received a Best Actress Emmy nomination for her portrayal of blues singer Bessie Smith in the HBO film Bessie, and starred as Carlotta Brown in the musical drama series Star from 2016 to 2019. She has also played prominent roles in the films Bringing Down the House, Taxi, Barbershop 2: Back in Business, Beauty Shop, Last Holiday, Hairspray, Joyful Noise, 22 Jump Street and Girls Trip. She also became host of the daytime talk show The Queen Latifah Show, which ran from late 2013 to early 2015 on CBS. She is also a celebrity spokesperson for CoverGirl cosmetics, Curvation ladies underwear, Pizza Hut, and Jenny Craig. Born Dana Elaine Owens on March 18, 1970 in Newark, New Jersey, to parents Rita Lamae (née Bray) and Lancelot Amos Owens, she came from a police family-both her father and her older brother were cops-which would later influence her rhyming style and life philosophy. Latifah did her schooling from Essex Catholic Girls’ High School in Irvington, and Irvington High School. 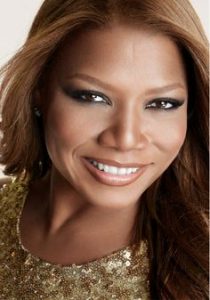 Queen Latifah Facts:
*She was born on March 18, 1970 in Newark, New Jersey, USA.
*Her real name is Dana Elaine Owens.
*She was nicknamed Latifah by a cousin while she was in her teens.
*Her parents divorced when she was age ten, and she was raised in the Baptist faith and attended Catholic school in Newark, New Jersey.
*In 1988, Latifah beat boxed for the hip-hop group, Ladies Fresh.
*She released her debut album, All Hail the Queen, on November 28, 1989, featuring the hit single “Ladies First”.
*She is the first female rapper to be nominated for an Academy Award.
*She was the first hip-hop artist to receive a star on the Hollywood Walk of Fame.
*She lost her brother in an auto collision in 1992 after she bought him a motorcycle.
*She was ranked #72 on VH1’s 100 Greatest Women of Rock N Roll.
*In 2010, Latifah purchased a home in the Hollywood Hills with her partner Jeanette Jenkins.
*She is friends with Jada Pinkett Smith, and L. L. Cool J.
*On March 21, 2018, her mother, actress Rita Owens died, following a long battle with a heart condition.
*Visit her official website: www.queenlatifah.com
*Follow her on Twitter, YouTube, Facebook and Instagram.