Belinda Stronach is a Canadian businesswoman, philanthropist and former politician born in Newmarket, Canada. She was a Member of Parliament in the Canadian House of Commons from 2004 to 2008, representing Newmarket-Aurora. In 2001, The National Post identified her as the most powerful businesswoman in Canada. In 2002, Fortune Magazine ranked her #2 in its annual list of the world’s most powerful women in business, and named one of Canada’s “Top 40 Under 40”, an annual award that honours the country’s most promising young leaders. Born Belinda Caroline Stronach in Newmarket, Canada, on May 2, 1966, she is the daughter of Elfriede Sallmutter and Frank Stronach, founder and chairman of Magna International. She served on the board of her father’s automobile consortium, Magna International. After graduating from Newmarket High School, she studied business and economics at Cardiff Metropolitan University, but dropped out after one year to work at Magna. She married Donald J. Walker in 1990, and the couple had two child, Nikki and Frank, before getting divorced in 1995. In 1999, she married to Olympic speedskating gold medalist Johann Olav Koss, they divorced in 2005. 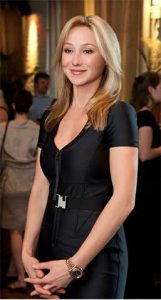 Belinda Stronach Facts:
*She is the daughter of Austrian parents.
*She is fluent in English and German.
*She is the founder and chair of The Belinda Stronach Foundation, a Canadian charitable organization.
*The World Economic Forum named her a “Global Leader of Tomorrow” in 2001.
*Visit her official website: www.belindastronach.com