Beulah Koale is a New Zealand actor of film, television, and theatre. He is known for his roles in television, such as Hawaii Five-0, Shortland Street, The Cul De Sac, and Harry, and in the films The Last Saint, One Thousand Ropes, and Thank You for Your Service. Born on October 26, 1992 in Middlemore Hospital, Auckland, New Zealand, Beulah grew up in Otara, New Zealand. He is the oldest of six children, with four brothers and a sister. He belongs to Samoan descent. He attended Tangaroa College. He regularly performed in church productions before becoming associated with Massive Company. With Massive Company, he performed in acclaimed shows Havoc in the Garden in 2011, and The Brave in 2012. He made his Hollywood film debut as Specialist Tausolo Aieti in war drama movie Thank You for Your Service. Koale has twin sons: Xavier and Isaac with partner Georgia Otene. 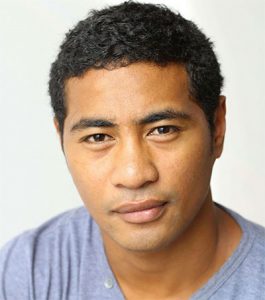 Beulah Koale Facts:
*He was born on October 26, 1992 in Middlemore Hospital, Auckland, New Zealand.
*He is the oldest of six children and of Samoan descent
*He has multiple idols, including Denzel Washington, and Cliff Curtis.
*His favourite movie is The Lion King.
*He currently resides in Hawaii.
*Follow him on Twitter and Instagram.