Bianca Kajlich is an American actress. She is best known for her portrayal of Jennifer Morgan on CBS’s Rules of Engagement, and for her role as Leslie Burton on NBC’s Undateable. She has also appeared in the films 10 Things I Hate About You, Bring It On, Halloween: Resurrection, and 30 Minutes Or Less and had a recurring roles in Boston Public and Dawson’s Creek. Kajlich also appeared in UPN’s Rock Me Baby and the Fox drama Vanished. She currently portrays Christina Henry on the Amazon Prime series Bosch. Born Bianca Maria Kajlich on March 26, 1977 in Seattle, Washington, to parents Patti and Relo Kajlich, she is of Slovak descent on her father’s side, and of Italian descent on her mother’s side. Kajlich graduated from Bishop Blanchet High School in Seattle, Washington, and attended Washington State University in Pullman, Washington. She started her career with the Olympic Ballet Theater in Edmonds, Washington as a ballet dancer. She is married to radio personality Michael ‘Psycho Mike’ Catherwood, with whom she has a daughter. She was previously married to Landon Donovan. 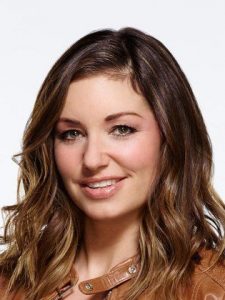 Bianca Kajlich Facts:
*She was born on March 26, 1977 in Seattle, Washington, USA.
*Her father is of Italian descent. Her maternal grandfather was of Italian descent, and her maternal grandmother had German and English ancestry.
*She was educated at Bishop Blanchet High School in Seattle, Washington, and Washington State University in Pullman, Washington.
*She worked as a professional ballerina for seven years.
*She was ranked #63 on the Maxim magazine Hot 100 of 2007 list.
*She has a dress size of 6 (US) and shoe size of 8.5 (US).
*Follow her on Twitter, Facebook and Instagram.