Bianca Knight is a retired American track and field athlete, who specializes in the 100 and 200 meters. Knight won a gold medal as part of the American 4×100 metres relay team at the 2012 London Olympic Games. In the final, the quartet of Allyson Felix, Tianna Madison, Knight and Carmelita Jeter, also broke the twenty-seven-year-old world record. Born on January 2, 1989 in Pearl, Mississippi, Knight attended Ridgeland High School in Ridgeland, Mississippi and won the female Gatorade Athlete of the Year in track & field in 2006. As a University of Texas freshman, Knight won the 2008 indoor NCAA 200 m championship in a collegiate-record time of 22.40. She retired from her profession in 2016. She lives in Orange County with her husband. 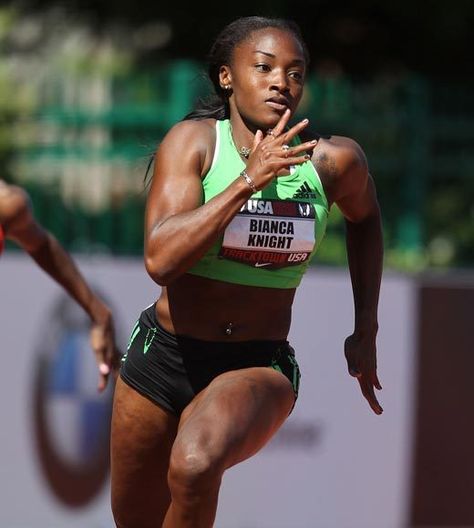 Bianca Knight Facts:
*She was born on January 2, 1989 in Pearl, Mississippi, USA.
*Former professional sprinter for adidas.
*She is the only Mississippi native to win a Gatorade Athlete of the Year award both female or male of any sport.
*She was a member of the USA women’s World Record 4×100 relay at the 2012 Rio Olympics.
*Her organization, the Bianca Knight Foundation, helps to raise money and provide grants for young athletes around her native state.
*Follow her on Facebook and Twitter.