Bill Pullman is an American actor of film, stage, and television. He is best known for his roles in the films Ruthless People, Spaceballs, The Accidental Tourist, Sleepless In Seattle, While You Were Sleeping, Casper, Independence Day, Lost Highway and Lake Placid. His notable television appearances include Revelations, Torchwood: Miracle Day, 1600 Penn, and The Sinner. His theater credits include The Goat, or Who Is Sylvia?, Oleanna, The Other Place, and All My Sons. Born William James Pullman on December 17, 1953 in Hornell, New York, to parents Johanna and James Pullman, he is of English, Northern Irish, and Scottish descent on his father’s side, and of Dutch descent on his mother’s side. He graduated from the Hornell High School in New York. After graduating from Hornell High School in 1971, Pullman pursued a Masters of Fine Arts degree from the University of Massachusetts Amherst in Massachusetts. He made his film debut in the 1986 film Ruthless People. He has been married to Tamara Hurwitz since January 3, 1987. They have three children. 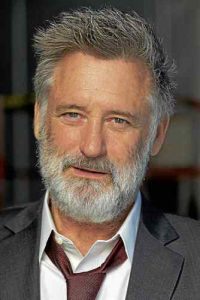 Bill Pullman Facts:
*He was born on December 17, 1953 in Hornell, New York, USA.
*He is the sixth of seven children.
*His ancestry includes Dutch, English, Northern Irish, and Scottish.
*He lost his sense of smell at the age 21 after a head injury and two-day coma.
*He worked as a teacher at SUNY Delhi and Montana State University’s School of Film and Photography.
*He is an ambassador of MS Society.
*He is friends with Peter Fonda.
*He established Hollywood Orchard in California with his wife.
*Lawrence of arabia (1962) is his favorite movie.
*Visit his official website: www.billpullman.org
*Follow him on Facebook.