Billie Eilish is an American singer and songwriter who became famous for her debut single, “Ocean Eyes”, which was released on November 18, 2016, through Darkroom and Interscope Records. She released her debut EP Don’t Smile at Me in August 2017. Born Billie Eilish Pirate Baird O’Connell on December 18, 2001 in Los Angeles, California, to parents actress-musician-screenwriter Maggie Baird and Patrick O’Connell, she is the younger sister of the musician and producer Finneas O’Connell. She started performing with Los Angeles Children’s Chorus at the age of 8. 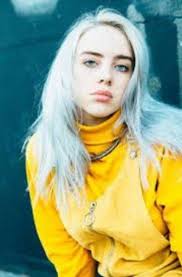 Billie Eilish Education:
She was homeschooled.

Billie Eilish Facts:
*She was born on December 18, 2001 in Los Angeles, California, USA.
*She is of Irish and Scottish descent.
*She began writing and singing her own songs at the age of 11.
*In August 2017, she released her debut EP Don’t Smile at Me.
*She appeared in a commercial for Apple Music in 2017.
*Visit her official website: www.billieeilish.com
*Follow her on Twitter, SoundCloud, YouTube, Facebook and Instagram.