Billy Ray Cyrus is an American country singer, songwriter and actor born in Flatwoods, Kentucky. He is most famous for his #1 single “Achy Breaky Heart” from his 1992 debut album Some Gave All, which was the best-selling single in the same country in 1992. It also became the first single ever to achieve triple Platinum status in Australia. As an actor, he is best known for his portrayal of Dr. Clint Cassidy on the TV series Doc from 2001 to 2004 and Robby Ray Stewart on Disney’s Hannah Montana alongside his daughter Miley from 2006 to 2011. Born William Ray Cyrus on August 25, 1961 in Flatwoods, Kentucky, to Ruth Ann Casto and Ron Cyrus, a politician and former steelworker, he started singing when he was four years old. He was spotted by Mercury talent scouts in 1990 while opening for a Reba McEntire concert in Louisville, Kentucky. He left college to play music with the band Sly Dog. He has six children, Miley, Noah, Trace, Braison, Christopher, and Brandi. 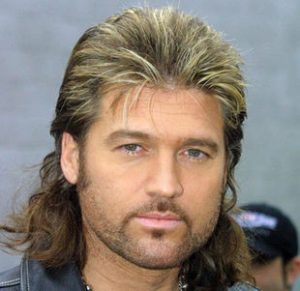