Christina Schmidt is a Canadian actress and plus-size model. She is known for her role as Terri on the television series, Degrassi: The Next Generation, for which she won the award for “Best Performance in a TV Series (Comedy or Drama) – Supporting Young Actress”. As a plus-size model, she has worked for MXM, Torrid, and Nygard. She was born on September 16, 1987 in Waterloo, Ontario, Canada and attended Waterloo Oxford High School in Baden. 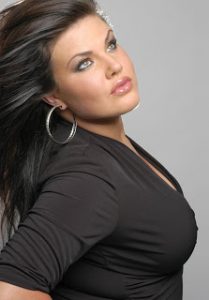 Christina Schmidt Facts:
*She was born and raised in the Kitchener-Waterloo.
*She took acting classes with television actor Dean Armstrong.
*She appeared on Degrassi: The Next Generation with actress Nina Dobrev.
*She holds a German passport as well as Canadian.