Lulu Wilson is an American child actress. She is known for her starring role as Mikayla on the show The Millers. Her film credits include Ouija: Origin of Evil, Deliver Us from Evil and Annabelle: Creation. She played Annie in the American comedy television series, Teachers. Born in New York City, on October 7, 2005, Lulu started her acting career when she was 3 years old, appearing in commercials and working as a voice actress. 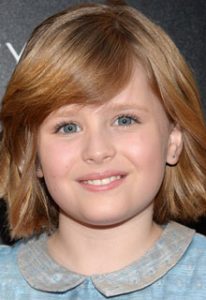 Lulu Wilson Facts:
*She is the youngest of three sisters.
*She started her acting career when she was only three years old.
*She made her film debut in 2014 as Christina in Jerry Bruckheimer’s dark thriller Deliver Us from Evil, opposite Olivia Munn and Eric Bana.
*Follow Lulu on Twitter and Instagram.