Blake Lewis is an American singer-songwriter and beatboxer who finished second on the sixth season of “American Idol” in 2007. He is a former member of the a cappella group KickShaw. Lewis’s notable hit songs include “Break Anotha”, “How Many Words”, “Your Touch” and “Sad Song.” Born Blake Colin Lewis on July 21, 1981 in Redmond, Washington, to parents Dallas and Dinah Lewis, he’s an only child with no siblings. His ancestry includes Welsh, Swiss, German, and Irish. He was educated at Kenmore Junior High, Inglemoor High School and Washington State University. 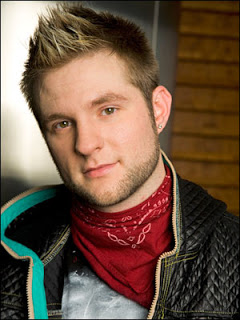 Blake Lewis Facts:
*He was born on July 21, 1981 in Redmond, Washington, USA.
*He is of Welsh, Swiss, German and Irish descent.
*He started singing at the age of five, and started beatboxing at 17.
*He was the runner-up on the sixth season of American Idol.
*His favorite male pop artists Robbin Thicke, Jamaroqui, Half Past Forever, Michael Jackson, Prince, Sting, Eric Benet, Maroon 5, Jason Mraz, U2, Gnarls Barkley, Martin Sexton, Duncan Sheik and M-Pact.
*His favorite female pop artists Bjork, Fiona Apple, Estmerd, Jill Scott, Tori Amos, Imogen Heap, Ella Fitzgerald and Sade.
*His favorite actor is Jim Carrey, and favorite actress is Jennifer Connelly.
*His favorite song is “816” by 311.
*He had never watched American Idol prior to being on the show.
*Visit his official website: www.BlakeLewisOfficial.com
*Follow him on Twitter, Myspace, YouTube, Facebook and Instagram.