Bob Goen is an American television personality and game show emcee. He is best known for his work on Entertainment Tonight between 1993 and 2004. He is also notable for hosting the American television game show Wheel of Fortune (CBS, 1989–1991; NBC, 1991). From 1993 to 1996, Goen served as emcee for the worldwide telecasts of “Miss Universe”, “Miss USA” and “Miss Teen USA” Pageants, all for CBS. He co-hosted GSN Radio for a year with Marianne Curan, his wife. Born Robert Kuehl Goen on December 1, 1954 in Long Beach, California, to Robert and Mildred, he was raised in the Los Angeles suburb of Lakewood, California. He was attended Lakewood High School and graduated with a degree in telecommunications and film at San Diego State University in 1976. He married TV personality Marianne Curan in 2004. He has a son from his first marriage to Sabrina. 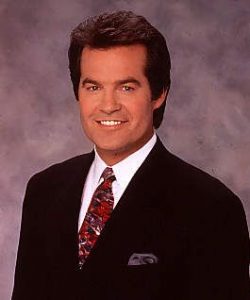 Bob Goen Facts:
*He was born on December 1, 1954 in Long Beach, California, USA.
*He graduated from San Diego State University with a major in telecommunications and film.
*He was highly influenced by Jim Lange as a game show host.
*He credits Jim Lange as his favorite mentor/best friend.