Bobby Deol is an Indian film actor. He began his acting career as a child artist in the 1977 movie Dharam Veer. He made his on-screen debut with a starring role as Badal in the 1995 film Barsaat, for which he won the Filmfare Best Debut Award. His other notable film roles include Gupt, Soldier, Humraaz, Badal, Bichhoo, Ajnabee, Tango Charlie, Apne, and Yamla Pagla Deewana. Born as Vijay Singh Deol on January 27, 1970 in Mumbai, India, Bobby is the son of Bollywood actor Dharmendra and Parkash Kaur. He is the younger brother of Sunny Deol, and half-brother of Esha Deol and Ahana Deol. He has been married to Tanya Ahuja since 1996. They have two children. 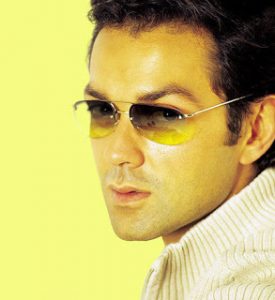 Bobby Deol Facts:
*He is the son of Bollywood mega-star Dharmendra and the brother of Sunny Deol.
*He is the cousin of actor Abhay Deol.
*His first role was in the 1977 film, Dharam Veer.
*He was once engaged to Pooja Bhatt.
*Follow him on Twitter.