Bradley Simpson is a British musician, best known as the lead singer and rhythm guitarist for the British pop/rock band The Vamps, whose debut single “Can We Dance”, debuted at number two on the UK Singles Chart. Other members of the band are James McVey, Tristan Evans, and Connor Ball. Born Bradley William Simpson on July 28, 1995 in The Royal Town of Sutton Coldfield, United Kingdom, to parents Anne-Marie (Oman) and Derek J. Simpson, he has an older sister named Natalie. He attended Fairfax School in Sutton Coldfield, UK. Brad met James McVey via YouTube in 2011 and began working on their debut album soon after. From 2014 to 2015 Brad dated Fifth Harmony’s Lauren Jauregui. 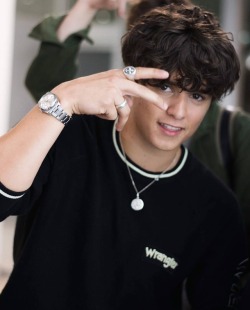 Bradley Simpson Facts:
*He was born on July 28, 1995 in The Royal Town of Sutton Coldfield, United Kingdom.
*Lead vocalist and guitarist of the band, The Vamps.
*”The Vamps” was signed by Mercury records in late 2012.
*He can play the piano, guitar and drums.
*His favorite band is Artic Monkeys
*He has a pet dog named Jesse.
*Follow him on Twitter, Facebook and Instagram.