Brandon Boyd is an American singer and songwriter best known as the lead singer of the American rock band Incubus, whose hit songs include ‘Anna Molly’, ‘Megalomaniac’, ‘Warning’ and ‘Drive’. His solo debut album, The Wild Trapeze, was released in July 2010. He is also famous for bringing interesting instruments into his songs, such as djembe and the didgeridoo. He has published three books, White Fluffy Clouds: Found Inspiration Moving Forward, From the Murks of the Sultry Abyss and So The Echo. Brandon was born Brandon Charles Boyd on February 15, 1976 in Van Nuys, California, to Priscilla Wiseman and Chuck Boyd. He younger brother Jason Boyd is the former lead vocalist of the band Audiovent. He is a 1994 graduate of Calabasas High School. 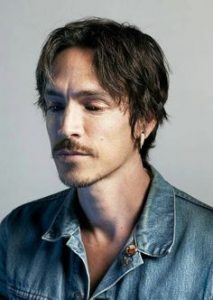 Brandon Boyd Facts:
*During his childhood, he was scorched by hot water and had to go to a burns unit.
*He is a vegetarian.
*He got his first tattoo at age 15.
*Follow him on Twitter, Facebook and Instagram.