Eunice Olsen is a Singaporean actress, tv presenter and beauty pageant titleholder who crowned Miss Singapore Universe 2000 beauty pageant. She started a career in television as the co-host of ‘Wheel of Fortune’ in 2002, and went on to host numerous talk shows and acted in various television dramas. In 2004, Eunice was appointed a Nominated Member of Parliament of Singapore. Born as Eunice Elizabeth Olsen in Singapore, Eunice is the only child of Francis Olsen and Alice Yap. She is of Swedish and Portuguese descent on her father’s side, and of Chinese descent on her mother’s side. She earned her bachelor’s degree in Political Science and Philosophy from National University of Singapore. 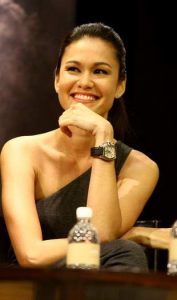 Eunice Olsen Facts:
*She is the only child in her family.
*Started playing the piano when she was 3 years old.
*US magazine, Esquire, chose her as the sexiest woman in Singapore in their Sexiest Woman Alive Atlas in 2010.
*Visit her official website: www.euniceolsen.com
*Follow her on Twitter, Facebook and Instagram.