Brandon Flowers is an American singer and songwriter. He is best known as the lead vocalist, keyboardist and occasional bass guitarist of the indie rock band The Killers. His solo debut album, Flamingo, was released in 2010, followed by his second album, The Desired Effect in 2015. He has topped the UK Albums Chart seven times, including work by the Killers. Born Brandon Richard Flowers on June 21, 1981 in Las Vegas, Nevada, to Jean and Terry Flowers, he grew up in the small town of Nephi, Utah. He belongs to English, German, French, Dutch, Scottish, and Lithuanian descent. He has been married to Tana Mundkowsky since 2005. They have three sons, Henry, Gunnar and Ammon. 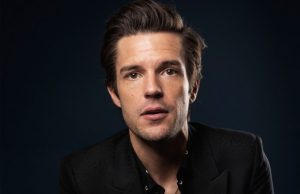 Brandon Flowers Facts:
*The youngest of six children, he was born in Las Vegas and raised in Nephi, Utah.
*He is a Mormon.
*He had planned to be a professional golfer at one point.
*He taught himself keyboards, despite having piano lessons as a child.
*He is a big fan of Sherlock Holmes.
*Visit his official website: www.brandonflowersmusic.com
*Follow him on Twitter, Facebook and Instagram.