Sophie Monk is an Australian singer, actress and model. She was one of the members of the music group, Bardot and released a solo album called Calendar Girl. She’s played memorable roles in such films as Click, Date Movie and Spring Breakdown. She has been named several times in the list of FHM’s 100 Sexiest Women in the World editions. Born Sophie Charlene Akland Monk on December 14, 1979 in London, England, to Sandi and Andrew Monk, she belongs to English and Irish descent. She moved to Queensland, Australia at an early age. She was in a relationship with Good Charlotte guitarist Benji Madden from 2006 to 2008. 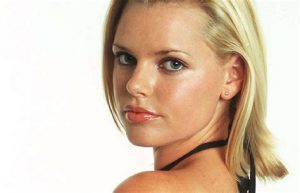 Sophie Monk Facts:
*She is of English and Irish descent.
*While growing up, she trained classical opera.
*She was the winner of the fourth season of The Celebrity Apprentice Australia in 2015.
*She was once engaged to Good Charlotte guitarist Benji Madden.
*Her favorite actor and actress are Brad Pitt & Angelina Jolie.
*Visit her official website: www.sophiemonk.com.au
*Follow her on Twitter, Facebook and Instagram.