Breckin Meyer is an American actor, voice actor, comedian, writer, television producer and drummer. He is best known for his roles in the films Clueless, Road Trip, Rat Race and Garfield: The Movie. He is also known for providing voices for the series of adult humor Robot Chicken, and was nominated for an Emmy for his writing on the Robot Chicken: Star Wars specials. He also voiced the adolescent Joseph Gribble on the animated series King of the Hill and starred on the Adult Swim series Titan Maximum. Apart from that, Meyer was the drummer in the Streetwalking Cheetahs with his brother, Frank, which recorded a demo in 1995. Born Breckin Erin Meyer on May 7, 1974 in Minneapolis, Minnesota, to parents Dorothy Ann (Vial) and Christopher William Meyer, he has an older brother named Frank and a younger brother named Adam. He has two children with his former wife, screenwriter and director Deborah Kaplan. 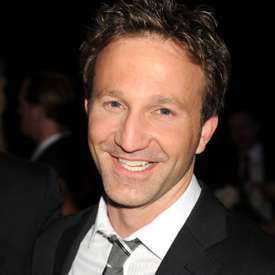 Breckin Meyer Facts:
*He was born on May 7, 1974 in Minneapolis, Minnesota, USA.
*He is of German, English, French, and Irish descent.
*He attended Beverly Hills High School.
*He went to the same High School as Corbin Bernsen, Lenny Kravitz, David Schwimmer, Angelina Jolie, Michael Klesic, Nicolas Cage, Jonathan Silverman and Richard Dreyfuss.
*His hobbies include playing drums, video games and sometimes sports.
*He is friends with Ryan Phillippe, Josh Holland and Seth Green.
*He is a big fan of Sean Penn, Al Pacino, Robert De Niro and Richard Dreyfuss.
*In late 2017, he began dating actress Linsey Godfrey.
*Follow him on Twitter and Instagram.