Brendon Urie is an American singer, songwriter and musician, best known as the lead singer of the rock band Panic! at the Disco. He plays bass, accordion, organ, and cello, among other instruments. With Panic! at the Disco, he released the debut album, A Fever You Can’t Sweat Out on September 27, 2005 via record label Decaydance / Fueled by Ramen. Born Brendon Boyd Urie on April 12, 1987 in Las Vegas, Nevada, USA, to Grace and Boyd Urie, Brendon grew up in a Mormon family. He is the youngest child of his family and has four older half brothers and sisters. He is a 2005 graduate of Palo Verde High School. He has been married to Sarah Orzechowski since April 27, 2013. 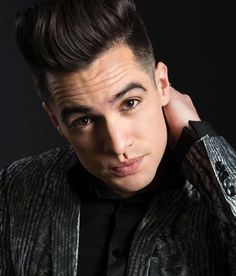 Brendon Urie Facts:
*He is the youngest in his family and has four older half-brothers and sisters.
*He is of native Hawaiian descent on his mother’s side.
*In 2006, he was named one of Spin.com’s Hottest Stars Under 25.
*He was named in number 6 for Musics Sexiest Single Men by AOL Music in 2007.
*He dated model Audrey Kitching from 2005 to 2006.
*Follow him on Twitter, YouTube and Instagram.