Britt Robertson is an American actress of film and television. She is best known for her roles in films such as Dan in Real Life, Tomorrowland, Keeping Up With the Steins, The Space Between Us, The Longest Ride, and A Dog’s Purpose, and the television series Swingtown, Life Unexpected, The Secret Circle, Under the Dome, Casual, Girlboss, Tangled: The Series, and ABC’s legal series For the People. Born Brittany Leanna Robertson on April 18, 1990 in Charlotte, North Carolina, she is the oldest of seven children to Beverly and Ryan Robertson. Robertson was raised in Greenville, South Carolina and all of her siblings were home-schooled. She made her screen debut in 2000 in an episode of Sheena. She made her film debut in 2003 in The Ghost Club, for which she received a Young Artist Award nomination for Best Performance in a TV Movie, Miniseries, or Special – Leading Young Actress. She was in a relationship with actor Dylan O’Brien from 2011 to 2018. In 2018, she began dating Graham Rogers. 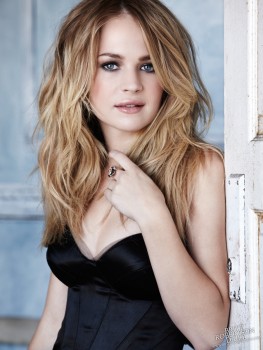 Britt Robertson Education:
She was home-schooled.

Britt Robertson Facts:
*She was born in North Carolina but grew up in Greenville, South Carolina.
*She is the oldest of seven children.
*She made her film debut in The Ghost Club (2003).
*She was considered one of the 55 faces of the future by Nylon Magazine’s Young Hollywood Issue.
*She is friends with actress Mahaley Manning.
*Follow her on Twitter and Instagram.