Laura Osnes is an American actress and singer who is best known for her work in Broadway stage. She has starred in Grease as Sandy, Anything Goes as Hope Harcourt, South Pacific as Nellie Forbush, and Bonnie and Clyde as Bonnie Parker, for which she received a Tony Award nomination for Best Actress in a Musical. She received a Drama Desk Award and her second Tony Award nomination for Best Actress in a Musical for her title role of Rodgers & Hammerstein’s Cinderella on Broadway. Born Laura Ann Osnes on November 19, 1985 in Burnsville, Minnesota, to parents Jane and Russell Osnes, she was raised in Eagan, Minnesota. She is of Norwegian descent on her father’s side, and of half German and half English descent on her mother’s side. Osnes played the role of a munchkin in ‘The Wizard of Oz’ in the second grade. She attended Eagan High School. She also attended the University of Wisconsin-Stevens Point, majoring in Musical Theater, before dropping out after one year to pursue a professional theatrical career. In May 2007, she married Nathan Johnson. 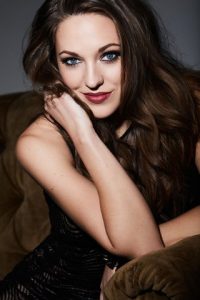 Laura Osnes Facts:
*She was born on November 19, 1985 in Burnsville, Minnesota, USA.
*Her ancestry includes Norwegian, German, and English.
*She competed on the reality show Grease: You’re the One that I Want!.
*She received a Tony Award nomination for her starring role in Bonnie and Clyde.
*She is a co-founder of The Broadway Princess Party with Benjamin Rauhala.
*Visit her official website: www.laura-osnes.com
*Follow her on Twitter and Instagram.