Brittany Murphy was an American film and stage actress, singer, and voice artist. She is best remembered by the public for her roles as Tai Frasier in the 1995 comedy film Clueless, and Alex Latourno in the 2002 film 8 Mile. She also had supporting roles in independent films such as Freeway and Bongwater. Her other movie credits include Interrupted, Don’t Say a Word, Sin City, and Uptown Girls. She also provided the voice of Luanne Platter in the animated television series King of the Hill (1997–2009). Her other well-known television credits include Drexell’s Class, Almost Home, Sister, Sister, and Pepper Ann. As a singer, Brittany she was the lead vocalist in her ’90s band “Blessed with Soul”. Born Brittany Bertolotti on November 10, 1977 in Atlanta, Georgia, USA, to parents Sharon Kathleen Murphy and Angelo Joseph Bertolotti, her parents separated when she was two years old. She was educated at Edison High School and John Burroughs High School. She got her big break in TV when she was 14 as Brenda Drexell in the series Drexell’s Class. She was married to Simon Monjack from 2007 to 2009. She died of cardiac arrest in Los Angeles, California at age 32. 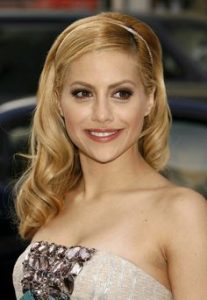 Brittany Murphy Facts:
*She was born on November 10, 1977 in Atlanta, Georgia, USA.
*Her mother is of Irish and Slovak descent, and her father’s ancestry is Italian.
*She took dance classes six days a week as a child.
*She played the piano and trumpet.
*She was very close friends with Meredith Zealy and Winona Ryder.
*She had a breast cancer scare and lumps removed from her right breast.
*She had trouble gaining weight due to her high metabolism.
*She was ranked #32 in 2003 and #8 in 2005 in the Maxim Hot 100 List.
*She was engaged to Jeff Kwatinetz (January 2004 – August 2004), and Joe Macaluso (December 2005 – August 2006).