Brooke Burns is an American film and television actress, as well as television presenter, and former fashion model. She became recognized for her role as Jessie Owens in the hit TV series Baywatch. Her other television roles include Out of the Blue, Ally McBeal, Just Shoot Me!, Miss Guided, Drop Dead Diva, CSI: Miami, To Tell the Truth, and Average Joe: Hawaii. Burns was born to Brad and Betsy Burns, on March 16, 1978 in Dallas, Texas, USA as Brooke Elizabeth Burns. She has two sisters. She married Gavin O’Connor in June 2013. She was previously married to Australian actor and model Julian McMahon from 1999 to 2002. 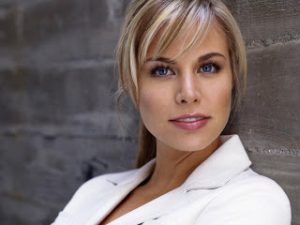 Brooke Burns Facts:
*She began modeling at the age of 15.
*She was a ballet dancer for 12 years during childhood.
*She was placed number 31 on the Maxim magazine Hot 100 of 2005 list.
*Currently, She lives in Los Angeles.
*Follow her on Twitter.

“There are still personalities that you bond with or a fighting spirit that you connect with, but as a host you have to stay impartial and root for all of them.” – Brooke Burns