Burt Reynolds was an American actor, director and producer. His breakout role was in 1972 as Lewis Medlock in the American thriller film Deliverance, but his career is full of notable roles in television and film including Smokey and the Bandit, Evening Shade, The Cannonball Run, Boogie Nights and The Longest Yard. For his performance in Boogie Nights, he received an Academy Award for Best Supporting Actor nomination. Born as Burton Leon Reynolds Jr. on February 11, 1936, in Lansing, Michigan, USA, he was the son of Fern H. and Burton Milo Reynolds. He was of English, Scottish, Scots-Irish and Dutch descent. He was a 1958 graduate of Florida State University. He was married to Judy Carne from 1963 to 1965, and Loni Anderson from 1988 to 1993. He had a son, Quinton Anderson Reynolds. Reynolds died on September 6, 2018 at a Florida hospital at age 82. 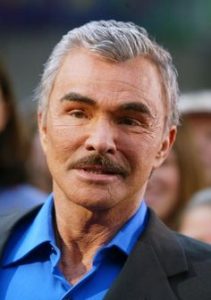 Burt Reynolds Facts:
*He had an adopted son, Quinton Anderson Reynolds.
*His acting mentor was Richard Griffiths.
*He received a football scholarship to Florida State University, where he became roommates with football broadcaster Lee Corso.